In order to understand why Monochrome cameras are different, it makes sense to briefly revisit how a camera captures a colour image.  A bare silicon sensor responds to light and dark, not colour.  A colour sensor is produced by putting an array of coloured filters (a Bayer filter) over the front of the sensor.  These coloured filters allow light of different colours through to hit the sensor in different places which can then be interpreted within the camera to recreate a colour image.  However there is a problem here – the resolution of the final image is compromised, in that an area which has a ‘red’ filter over it, only receives red light information, an area with a ‘blue’ filter over it only receives blue light information and an area with a ‘green’ filter over it only receives green light information.  As each of these coloured pixels takes up finite space on the sensor, the final resolution of a colour sensor is therefore compromised compared to a monochrome sensor where each pixel would only be reading light or dark.  There are a number of articles available online which cover this in more detail, such as http://www.red.com/learn/red-101/color-monochrome-camera-sensors

Something else to consider is that because of the removal of the Bayer filter, each pixel now receives all the light available (subject to it getting through the lens of course) without having each wavelength ‘filtered’ by the Bayer filter.  So the response of the sensor to given set of lighting conditions increases (although there is a downside to this, which is discussed below).  How much in real terms – 1-3 stops has been quoted depending on the wavelengths concerned.  As an example, below are two images of a lovely guest in my garden last night – one taken with a standard Canon EOS 5DSR (and converted to monochrome) and the other with a Monochrome converted 5DSR.

Both images above were taken with the same settings (f4.0, 1/125s), and brightness has not been changed, although contrast on both has been tweaked to make them more easily comparable.  The standard camera used an ISO of 6400.  The Monochrome camera used an ISO of 2500 – so about a 1.5 stop improvement.  So when every photon counts, this enhanced sensitivity can be a huge bonus.

The increased sensitivity and lower resultant ISO mean that the image has less noise, so there is an upside on sharpness and reduction of digital artifacts.  While hard to see on the low resolution images for the website, a close up of the image taken with the Monochrome camera exhibits less noise and more sharpness than the one taken with the Standard camera.

Of course there are downsides to consider as with all specialist tools.  When making black and white images from standard colour images, it is easy to emulate the effects of different filters using Photoshop, and get different visual effects such as darkening the skies in a landscape by using a red filter.  With a Monochrome camera if you want to do this then the light needs to be filtered during image capture, just as when using black and white film, so depending on your needs it means carrying filters around with you.  Some filters you need may well be opaque in the visual region, so you wont be able to see an image through the viewfinder with the filter on, necessitating the use of a tripod, and some trial and error.

Removing the Bayer filter is a complex and delicate process.  My camera was done by MaxMax in the US (https://www.maxmax.com/) and while some people have tried this themselves it is not for the faint hearted.  Once removed, as mentioned above, the sensitivity of the sensor is changed, and as such the internal metering will no longer be accurate, so it’s back to manually checking that the output of the image is what you want.  At least with digital camera this feedback can be done instantly, rather than having to wait until you’ve developed your roll of film….

I’ve recently had one of my own Canon EOS 5DSR cameras converted to Monochrome by MaxMax (it is also now a multispectral camera capable of imaging UV, visible and IR – which I will discuss more in the future). At the time of writing this – August 2017 – it is the first of its kind outside of the US, and offer the possibility of extremely high resolution (>50 megapixel) monochrome, multispectral imaging.  I will now be looking at potential skin imaging applications such as UV induced fluorescence of dry skin, melanin imagining, and high resolution portrait photography using it, as well as the occasional hedgehog photo of course. 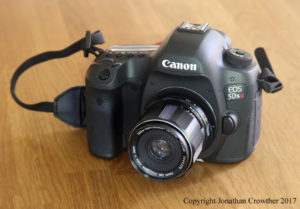