When capturing photographs there are a lot of things which have to be taken into consideration.  Lens choice, filters, even what camera to use.  However something which really is key is light – what are you going to use as your light source?  Once you have decided on the source there are things you need to know about it for scientific imaging – for instance is it reproducible, does it give light of the wavelengths you need?  Often we use flash as the light source as it is controllable.  However commercial camera flashes are often designed to block UV and let more visible light through.  For UV imaging this is a problem.  So how do we address this?  The flash can be modified to block visible and emphasize the UV, for instance as is done by Advanced Camera Services.  The end result is a flash which looks black (due to the visible blocking filter).  This can be seen below where I have a modified and a standard flash gun side by side. 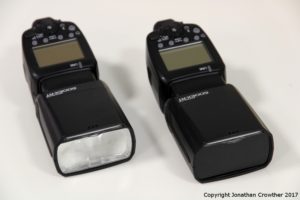 So, what is the effect of doing this, and how do we measure it?  This got me thinking, how to simply capture the output from a flash, which only lasts around 1ms at most, and be able to quantify the light emitted as a function of wavelength, in a controlled manner so I can compare them?  I needed a spectrometer, and a housing to hold the flashes and spectrometer which was light proof, and ideally non reflective. For the Spectrometer I used an Ocean Optics FX, such as the one here. This can capture short duration light pulses and as such is ideal for flashes.  The housing was the easy part, I built one from wood I had laying around the workshop and painted the inside with Black 2.0 from Culture Hustle. This amazing paint is incredibly non reflective, and is ideal for applications such as this.  What I ended up with is shown below. 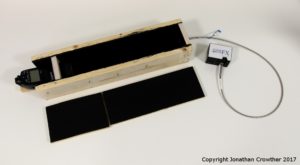 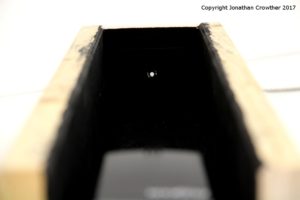 The position of the flash can be fixed relative to the spectrometer, and the box is light proof, so can exclude outside influences.

What did I see when I compared the standard and modified flashes.  The two spectra are shown below.

The standard flash gives a strong output from about 410nm up well into the IR (the spectrometer only reads up to 850nm.  As such the standard flash would be completely useless for UV imaging as it does not emit any light there.  The UV modified flash emits light between 330nm and 400nm, with peak emission around 375nm.  It does not produce visible light above 410nm (although a small visible signature is seen when firing the flash from the blue end end of the spectrum <410nm).  It also does produce some IR, although a lot less than the unmodified flash gun.  While the UV output looks low relative to the visible output it is fine for UV imaging, and is similar to the effect seen with natural sunlight, where intensity drops as you go below 400nm down to virtually nothing 300nm.

Very often simple solutions are the best solutions.  I can rapidly build test equipment to solve problems such as this, applying practical knowledge and expertise to technical challenges.  In doing so I can provide data to support your work.  If you would like to know more about this or other areas I am working on please get in touch through my Contacts page.