One major problem occurs when trying to obtain high quality colour images – lenses bend light of different wavelengths in a different manner.  The result on the image is known as ‘chromatic aberration’, and results in colour fringing.  In order to try and compensate for this, lens designers tweak their lenses to try and ensure all light is focused to the same point, irrespective of wavelength, but it is extremely complex to perfect.  Using the typically accepted current nomenclature, when this has been done for 2 wavelengths (typically red and blue), you’ll see this on lens descriptions as ‘Achromatic’.  Sometimes lenses are described as ‘Apochromatic’ where 3 colours are brought together at the same point, however camera manufacturers often use the term APO just to describe lenses which have ‘minimised’ the effects of chromatic aberration.

The more extreme the wavelength range being imaged, the harder it is to get all the light to focus to the same point. Lens which are designed to image in UV and IR as well as visible, obviously have an extreme length of wavelengths over which they need to perform.  This is where the Asahi Pentax Ultra Achromatic Takumar 85mm f4.5 (otherwise known as the UAT) lens comes in. 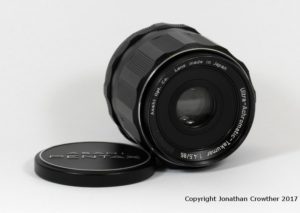 A very rare lens, with about 40 known to be currently in existence, this lens does not contain glass – the lens elements are made from quartz and calcium fluoride.  As such it is able to image in UV down to about 220nm, and is corrected for chromatic aberration from 220nm (UV) to 1000nm (IR).  Given the design it is highly prized for anyone wanting to image in UV and IR.  While described as an Achromatic lens, it only needs to be focused in the visible region for imaging in UV and IR and is therefore considered to be more ‘Apochromatic’ in its behaviour.

Originally sold in the late 1960’s and early 1970’s this lens was designed for scientific and forensic imaging. It came boxed with a set of UV and IR filters, to remove the visible light (although the UV filters are known to transmit a substantial amount of IR and are not suitable on their own for UV imaging). Understandably these lenses are now highly sought after collectors items. 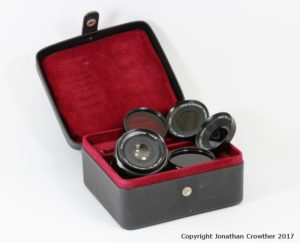 Having recently acquired one of these iconic lenses, I am now looking forward to using mine for research into new and interesting skin imaging techniques.