In normal photography, visible light interacts with a subject, and is captured in a camera.  So visible light comes in, visible light is imaged.  However not all interactions are so straightforward – sometimes light can come in, be absorbed by the subject, and then re-emitted with a different wavelength.  If a subject is exposed to UV light, and longer wavelength visible or IR light is emitted, this is known as fluorescence.  If visible light is being emitted as a result of exposure to UV light, this is UV Induced Visual Fluorescence (or UVIVF for short).  A number of minerals exhibit this behaviour strongly, and interestingly enough so do our own bodies.

So what you may ask, this seems like a complex way to go about imaging – you need a UV light source, and a dark room in which to perform the imaging.  As such it is more complex than normal visual light imaging.  However there are a number of benefits. Firstly some things show up very strongly in UVIVF – for instance dry skin.  When 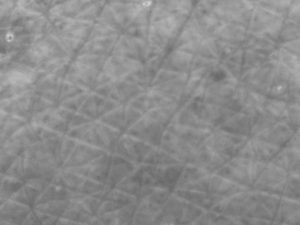 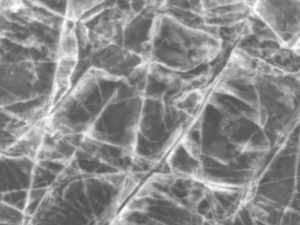 ur as shown in the image to the left.  However if the skin is extremely dry then the dry skin itself fluoresces strongly, showing up white in colour. A dry skin sample is shown in the image on the right. The degree of whiteness can then be calculated using image analysis, so the device can be used to measure how dry the skin, as well as providing a very visual record.

As well as grey scale UVIVF, the colours of light being emitted can provide very valuable information about the skin. The rather scary looking image on the

left was a photograph I took of myself using a UVA flash on a standard Canon EOS 5DSR camera and 40mm lens in a darkened room.  My T shirt shows up bright due to the optical brighteners in the washing powder (along with the fibers of clothing on my face which show up as light blue flecks).  Much more interesting though is 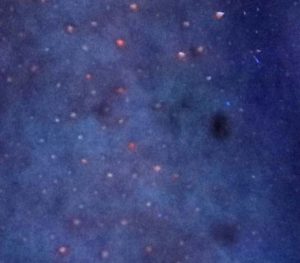 if you look in more detail at the nose area, which is shown in the image on the right, you see multi coloured spots.  These spots correspond to the locations of pores – blackheads basically – and tend to show up in highest concentration on the nose and forehead. The colours are caused by porphyrins, a class of chemical compounds produced by bacteria on the skin. These porphyrins fluoresce under UV light, emitting visible light which is then captured in the photograph. Despite being quite gross (people love it when you tell them that you are imaging bacterial waste on their skin), the colour of the light can actually tell you about the different species of bacteria which are present.  So not all of my pores have the same bacteria present, and my face is actually quite a diverse ecosystem.